Eclipse Theia is an extensible platform to develop full-fledged, multi-language, cloud & desktop IDE-like products with state-of-the-art web technologies. It is implemented in TypeScript, CSS and HTML. Eclipse Theia is a free and open-source integrated development environment (IDE) framework for desktop and web applications. It is implemented in TypeScript, is based on Visual Studio Code, and emphasizes extensibility.

After we announced the release of Eclipse Theia 1.0 and published a blog about it, we received a number of questions about the differences between Theia and Visual Studio (VS) Code and why we’re calling Theia “a true open source alternative” to VS Code. Here are some clarifications I hope will help people understand the differences between the two and the value of Theia.

In the Words of Microsoft

I want to emphasize that VS Code is a great product that is loved by many developers. This is the primary reason Theia adopted many of the VS Code user experience features.

But, VS Code is not truly open source. Microsoft explains it well in their VS Code FAQ: “…it is more accurate to say that Visual Studio Code is “built” on open source, rather than “is” open source…”

The first thing to understand is that, at least for this release, Theia is not intended to be a tool that developers download and use directly. There isn’t even a developer tool download available from the Theia project.

Theia 1.0 is intended as a production-ready platform that any company (e.g. ARM, D-Wave, Gitpod, Google, Red Hat) or community (e.g. Arduino) who wants to provide their adopters with a modern developer experience can build from. The easiest way to see Theia in action is to try products such gitpod.io, or Red Hat Code Ready Workspaces, or ARM’s mbed Studio.

Eclipse Theia is built, distributed, and used under the Eclipse Public License, a commercial-friendly open source license approved by the Open Source Initiative.

The VS Code repository on GitHub includes code that is licensed by MIT, but the VS Code distribution is released under a proprietary Microsoft product license. For most developers this is not an issue, as the tool is free, as in free beer. However, this approach means that it is difficult for companies and communities other than Microsoft to use VS Code in their own products. They require an open source platform which is free, as in freedom.

The Microsoft VS Code license also indicates the software may collect information about how the software is used and who is using it, and then send that data to Microsoft. The license makes it clear you can opt out of many telemetry data collection scenarios, but not all.

Eclipse Theia is freely available to everyone who wants to use it. There are no obligations to, or dependencies on, any company that has contributed to the code base or that uses it.

VS Code is a Microsoft product that is largely developed as open source, but is controlled by Microsoft. Anyone who relies on VS Code is then dependent on the future investment of Microsoft to continue supporting on-going development of the product. Theia is one of the most active and diverse projects at the Eclipse Foundation with steady contributions from ARM, Ericsson, Red Hat, SAP, TypeFox, and others.

Theia builds on top of many of the core open source pieces of VS Code such as the Monaco editor, the extension model, Language Server Protocol and the Debug Adapter Protocol. But Theia and VS Code are architecturally different in two main ways:

Theia uses the same extension model as VS Code, so any extension that works with VS Code will work with Theia. Unfortunately, the terms of use for the Microsoft Marketplace can only be accessed from Microsoft products. Because of that, Theia uses the open source extensions in the vendor-neutral Eclipse Open VSX marketplace. These extensions can be used by anyone, with no restrictions, whether they’re developing in Theia or in VS Code. Better yet, the code that implements the Open VSX marketplace is open source, and enabling self-hosted repositories within your organization is one of the stated goals of the project.

For more insight into the differences between Eclipse Theia and VS Code, read the Jaxenter interview with Theia project co-lead, Sven Efftinge.

To learn more about Theia and start using it, visit the website.

As more businesses are moving to the cloud with cloud-native solutions, having a cloud IDE (Integrated Development Environment) can help you deliver code faster and more reliably. Cloud IDEs often provide features like cross-platform support and instant creation. A Cloud IDE offers a centralized creation and testing environment for you and your team, while minimizing platform incompatibility. In other words, you can have a pre-configured development environment in the cloud that is independent of your own computer's operating system and limitations.

Eclipse Theia is an 'extensible platform to develop multi-language cloud & desktop IDEs with state-of-the-art web technologies'. Visually, it is designed to look and function in the same way as the Microsoft Visual Studio Code, which means that it supports multiple programming languages, has a versatile interface and an integrated terminal. What distinguishes Eclipse Theia from other cloud IDE applications is its extensibility and vendor neutrality. It can be changed using custom extensions that allow you to build a cloud IDE tailored to your needs.

In this guide, we will learn how to set up the default version of Eclipse Theia IDE platform on a Civo managed K3s cluster. 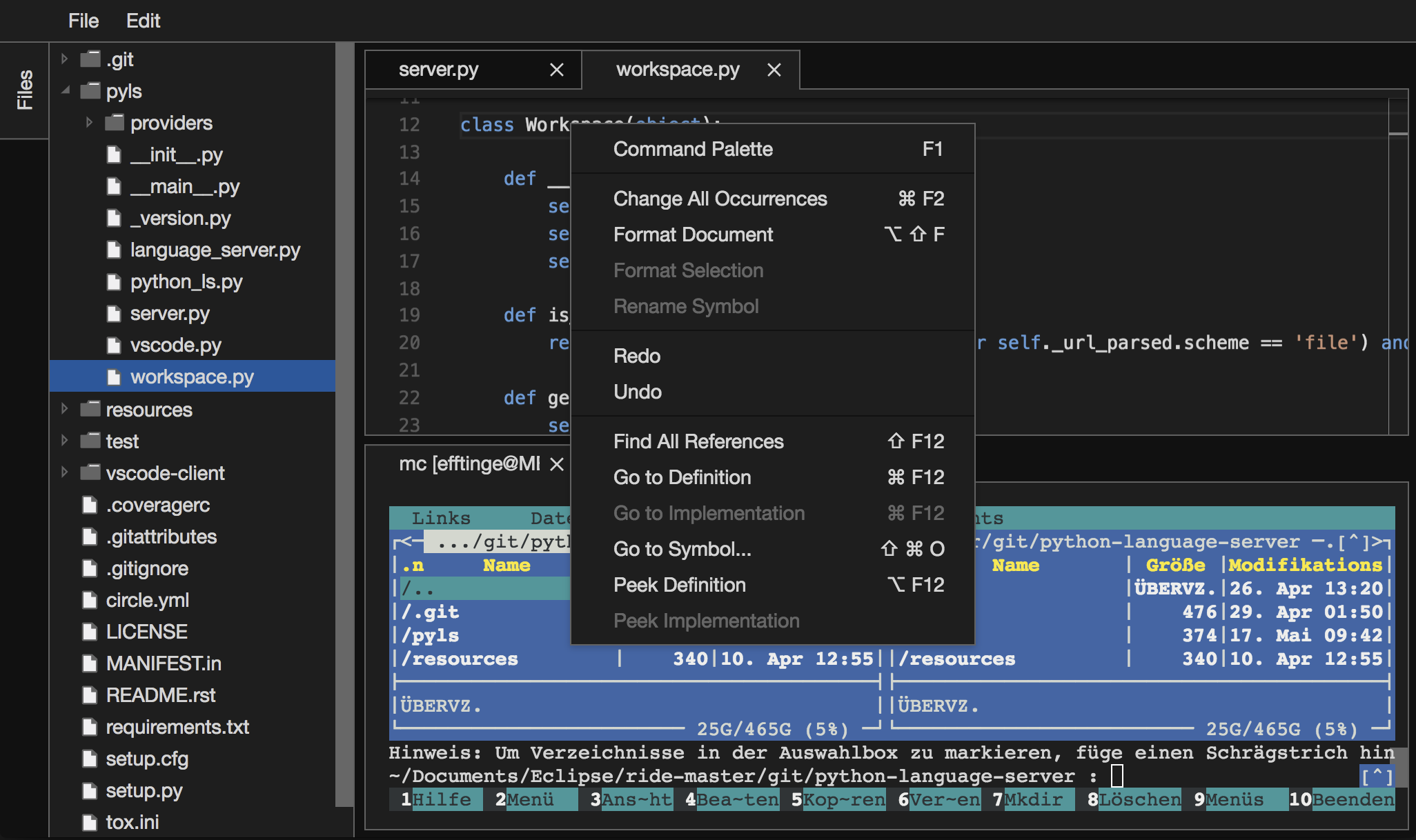 Make sure you have a cluster running with Nginx ingress controller and Cert-manager set up. This is easily done with the Civo Kubernetes marketplace when creating your cluster:

To install and expose Theia to our domain, we need to apply yaml files. We have divided the installation process into three parts. 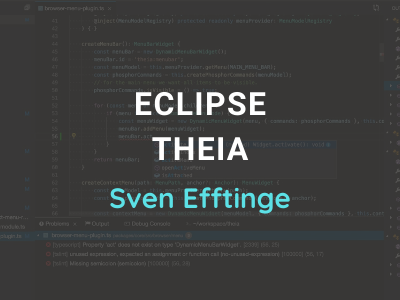 In this part we will deploy all resources to our cluster. I have prepared a repository on GitHub with all the required yaml configuration files. We will be pulling from this repository's files so if you want to have a look at what's in them or modify them to your use case, you can find the repository here.

For this part we will use wget to save eclipse-theia.yaml locally, in our current directory. In your terminal, run:

Now we use our favourite editor to edit the downloaded eclipse-theia.yaml and change theia.example.com to the domain linked with your cluster IP address. For this guide we will be using theia.tros.tech, and you will need to change it to a domain you control that you have configured in your Civo account's DNS configuration. For more information on configuring DNS records on Civo, see this guide.

We need to edit the example.com domain

Edited domain to your own details

Now we will use kubectl to create our Deployment, Services, and Ingress to the cluster with a single yaml file.

To verify resources have been deployed, you can use the command kubectl get all -n theia.

For this we need to have a certificate issuer in the namespace theia. Get the yaml file for certificate with the following command:shwget https://raw.githubusercontent.com/DoNnMyTh/Eclipse-Theia/main/production-issuer.yaml

Now open the downloaded production-issuer.yaml in an editor, and edit the email field to your address.

After this use kubectl apply -f production-issuer.yaml to apply the certificate issuer to your cluster. This will be picked up by Cert-manager, and allow you to have a certificate issued for HTTPS.

To verify if certificate is issued, you can run kubectl get certificate theia-prod -n theia - it should give you a message like the following:

Now let us secure our IDE

For controlled authentication of our IDE, we will be using simple htpasswd to set up password control. First, create an empty file called auth. This file needs to be named auth, because the Nginx Ingress Controller expects the secret to contain a key called data.auth. If it is missing, the controller will return HTTP 503 Service Unavailable status. Now we will use htpasswd to generate authentication credentials. This is why you needed to make sure you had the Apache utils installed, as htpasswd is part of that. When you run the following command, it will ask you for a password for the username you have specified, like in the image below.

Now we need to generate a secret in our Civo cluster to store the password:

To verify the secret, use: kubectl get secret theia-basic-auth -o yaml -n theia

When you will visit your domain, you will be asked for a username and password.

And then you can see your IDE, all ready for your code!

If you wanted to, you could extend this setup process to spin up a development environment on demand using an infrastructure-as-code tool such as Terraform, allowing you to run your IDE for only as long as you needed it to make changes to code, push to your code repository and then delete the cluster to save on costs.

If you have any issues following this guide, ask away in the Civo community Slack or on Twitter. You can find me at DoNnMyTh, and Civo at @civocloud.