Hi guys, looking for a new tank for grinding Silver Lions and The German Tech Tree? My go too was the T but with the nerf and with it getting in only 5.7 matches its toast. So I would like to grind out the German like i did on the Russian. Any suggestions for one for the German side? The ␠Tiger is a premium gift rank III German heavy tank with a battle rating of 5.3 (AB/RB/SB). It was made available during Update 1.77 'Advancing Storm' through the 'Flying Serpent, Crouching Tiger' event which spanned from 31 March to 3 April 2018. 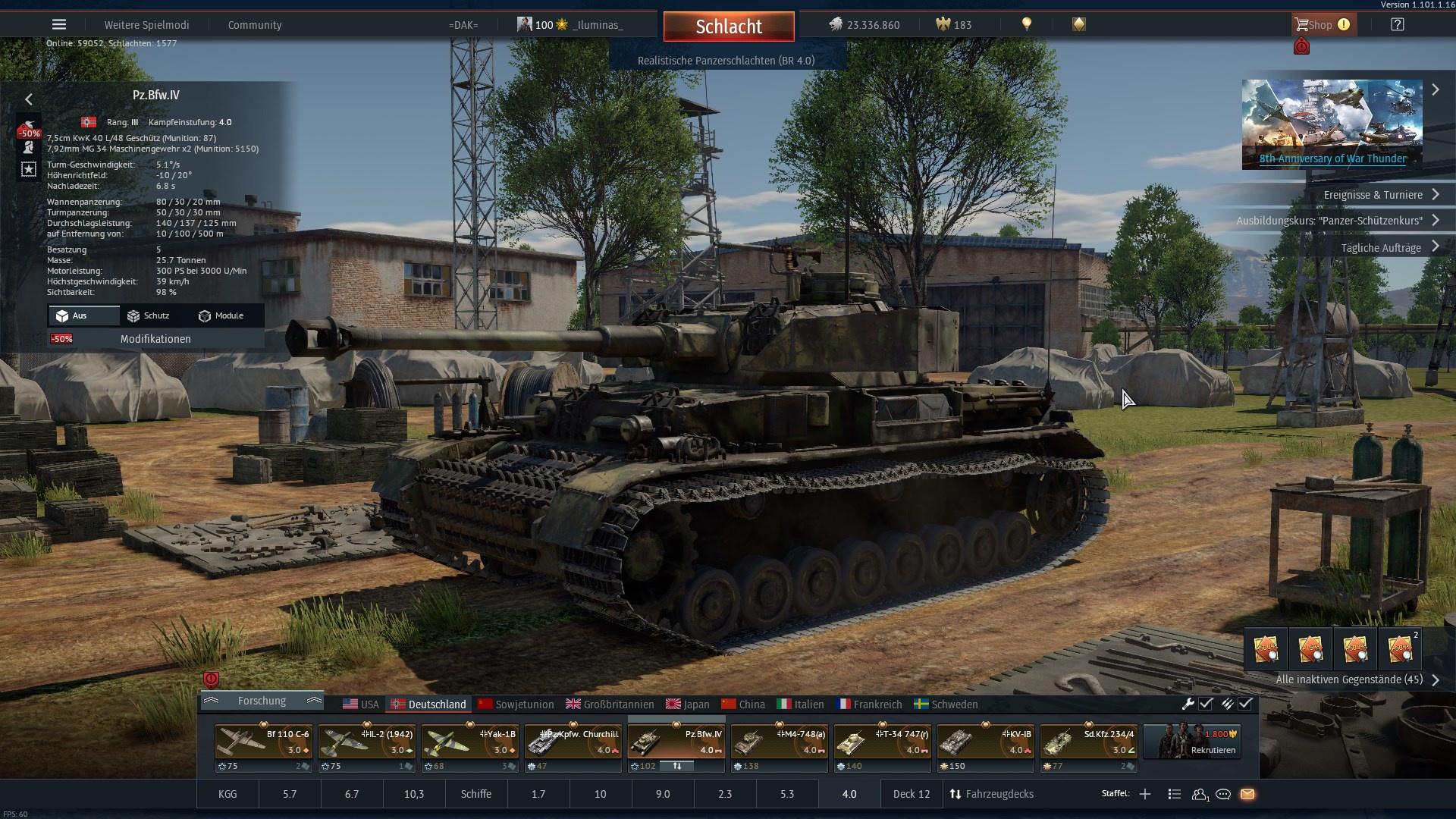 In War Thunder, the PzKpfw KV-1B 756(r) is a rank 3 German premium heavy tank with a Battle Rating of 5.3. As a premium, it comes with all modifications (including ammunition) already researched. Its weight is 47.5 tonnes, and maximum speed is 37 kph, which the tank can reach in 15 seconds when riding on flat surface. The turret’s rotation speed is 12 degrees per second, while the reload time is 6.2 seconds with a fully trained loader. 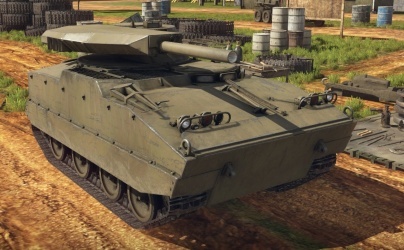 Frontal armour is 75 mm thick both on the lower glacis (26 degrees of slope), and on the upper glacis (30 degrees of slope), with 40 mm plate sloped under 72 degrees covering the area between them. The un-sloped side armour is 75 mm thick, while lower rear armour thickness is 70 mm under slope of 14 degrees (60 mm for upper rear armour plate). An additional 25 mm's of applique armour is then fitted on both the lower and upper frontal glacis, giving it 100 mm of armour protection. Three other 25 mm armour strips then protect the turret ring. The turret armour is 105 mm thick all around, with the gun mantlet having 50 mm of armour protection. The commander’s cupola has a thickness of 50 mm all around, and the armour is 30 mm thick on the top of the hull, and 40 mm on the turret’s top.

This tank is sometimes dubbed “Baby Tiger” and despite the fact it’s basically a Soviet tank, the nickname is quite fitting. The frontal hull armour is actually even better than that of the Tiger (same thickness combined with 30 degrees slope), and when properly angled, it can be very resilient to enemy fire. Additionally, the rear-mounted transmission means you don’t need to worry about your tank being immobilized by penetrations from the front. In turn, the performance of KwK 40 gun is fully adequate on its given BR even with basic ammunition, as it can still reliably penetrate most of its opposition, and when aimed at weak spots, it can destroy virtually any enemy tank encountered. However as with the Tiger, you shouldn't fall under the impression that you’re invincible! Flank shots will be extremely dangerous for you because of large fuel tanks occupying the space behind the side armour, which are prone to being detonated or set on fire. The gun mantlet is only 50 mm thick, and despite this being a small target, even lighter guns can penetrate you this way, disabling your turret crew and threatening with detonation of ammunition stowage in the turret. That being said, it is recommended to reduce your ammunition load in order to remove excess shells from your turret and decrease the chance of an ammunition explosion. When facing this tank, it is also recommended to shoot the driver’s vision slit, as applique armour is missing there.

With great armour, good firepower for its BR, and good mobility for a heavy tank, the PzKpfw KV-1B 756(r) is definitely worth the GE’s spent, and will offer you very enjoyable heavy tank, allowing you to earn extreme amounts of Silver Lions and Research Points due to it being a premium vehicle.

When the German army encountered Soviet KV-1 heavy tanks in 1941 during the opening stages Operation Barbarossa, it was a shocking experience. These Soviet behemoths were impervious to German 3.7 cm, 5 cm and short-barrelled 7.5 cm guns, while the KV-1 could dispatch any German tank at distance with ease. However, the tide has turned with the use of the PzKpfw IV Ausf.F2 medium tank and the StuG III Ausf.F assault gun, both being armed with the new 7.5 cm KwK 40 L/43 gun. This weapon was able to penetrate the frontal armour ofa KV-1 at combat ranges, ending the Soviet superiority. The Soviets responded with several new variants of the KV-1 in an attempt to strengthen their armour protection (models 1941 and 1942), or to improve mobility in exchange for lighter armour (KV-1S). Even despite these attempts, KV-1’s started to be obsolete, and were gradually phased out of service in favour of brand new IS-series heavy tanks which had a better armament and armour protection.

During fierce armoured clashes on the Eastern Front, the Germans were able to capture a number of KV-1’s, most of them being abandoned by their crews due mechanical failure or combat damage. The Germans eventually repaired these tanks, painted them with their own camouflage, and used them against the Soviets under the designation PzKpfw KV-1A 753(r) (for captured model 1941 tanks) or PzKpfw KV-1B 755(r) (model 1942). These tanks were mostly used with their original armament, but the decision was made to further modify captured KV-1 tanks by installing German armaments and other modifications. The resulting vehicle was designated PzKpfw KV-1B 756(r), and was based on the KV-1 model 1942 with a cast turret and 25 mm applique armour. The Soviet 76.2 mm F-34 gun was removed, and the German 7.5 cm KwK 40 L/43 gun was fitted along with the new mantlet design taken from the PzKpfw IV Ausf.G medium tank - this change significantly enhanced the tank’s firepower. Other changes included a commander’s cupola from the PzKpfw IV tank with wo-part hatch, a ventilator on top of the turret taken from the captured T-34 mod. 1942 medium tanks, and additional utility baskets on the rear deck.

Only one PzKpfw KV-1B 756(r) was produced. It was attached to the 204th Panzer Regiment, a part of the 22nd Panzer Division, and was operational in 1943 during Battle of Kursk. Its fate is unknown. 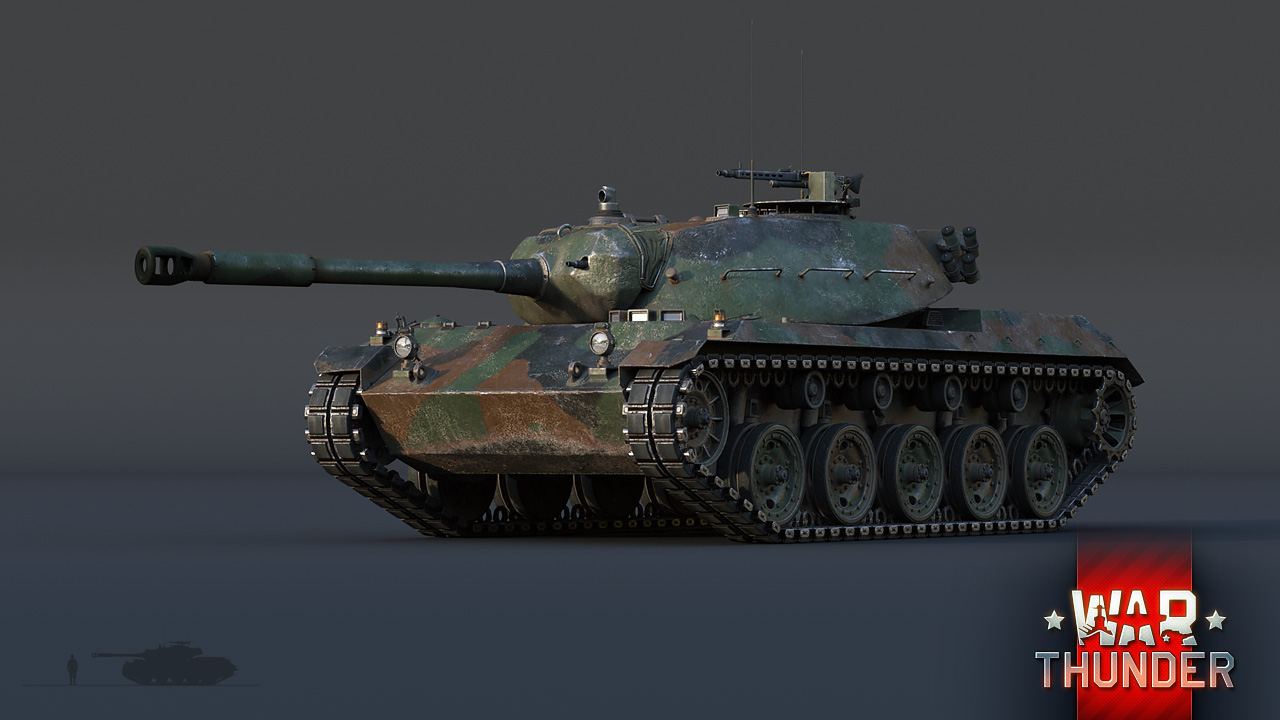 In one of the following Updates, we will include the
'Emblem of the 22nd Panzer Division' to War Thunder: 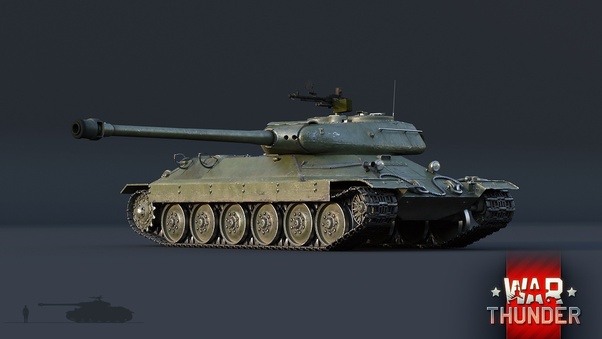 Do you already have this wonderful KV-1B 756(r) in your hangar?
Leave a post with your experiences in the comments!